Identify the news peg in an article 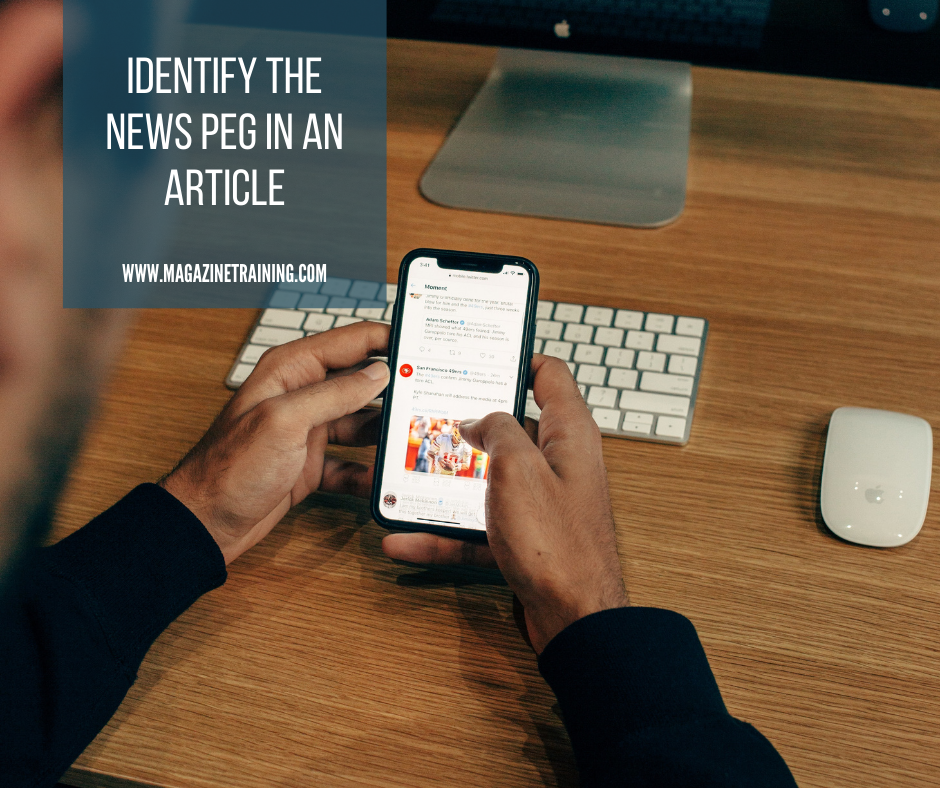 The goal and news qualities

To succeed, it is in the writer’s best interest to pick the conflict that is a natural part of the story and stay with it throughout the article. Keep in mind that the conflict is supported by other demands of the article. All articles must satisfy readers’ questions. In short, relevant articles possess news qualities.

When you pick the conflict, consider the characteristics of news qualities.

Is it timely? Some event happened and people are talking about it. The emphasis here is on the currency of the information. A tragedy last month is dated as a report for a daily newspaper; however, a feature writer with a creative bent can find a fresh angle to describe and use the incident to highlight the action. The September 11, 2001 disaster is of interest today as writers reflect on new angles such as the role of buildings as symbols of capitalism, security issues vs. personal freedoms, the call to fire fighting and police service as an act of commitment to a noble truth.

Is it close? The nearer the event to the audience, proximity, the more interesting the audience
will find that information.

Will it affect a lot of people? The more impact, the newsier the story.

Is it unusual? About once a decade a man will bite a dog… and it’s always news but the reverse isn’t news. Dog bites are common and aren’t typically reported unless the attack is particularly severe such as the case of an animal hurting a child. As you write, keep these ideas in mind as you refine the article’s most salient point.

By ruminating on the timeliness, proximity, unusualness and other aspects of the ideas, you will help yourself find a news peg—the reason this article is being written now. Sometimes an anniversary is all that is needed to make an article idea fly. Sometimes it’s a matter of pairing two ideas such as restaurants along the Susquehanna River that are available by boat. Other times the news peg is a general awareness that the topic is hot such as the trend to wear face masks in Asian countries during the Severe Acute Respiratory Syndrome panic of mid-2003. Many approaches are available for the news peg. Part of your job as a feature writer is to isolate the strongest news peg and use it to build a memorable article.

Ever meet a person who clips funny sayings or illustrations and gives them to her friends? A women’s magazine might be interested in an article on a person who entertains her friends with cut-out phrases and illustrations. This idea is meant to be fun and the writer would use a light tone to explain a playful person who shares humor in this way with friends, but does this story meet the requirements for news? What would you say?

Tip: Should your interview lag and you need to juice it up, try some of ABC TV’s Barbara Walter’s sure-fire questions.

What was your first job?

When was the last time that you cried?

Did you ever… build a weapon, sing at a wedding, fall out of a tree?

Ask any silly question that comes to mind. Usually, these questions get nothing but a laugh from your source; however, sometimes the source comes back with something very unexpected.

A news reporter speaking to a university class on these questions had one member of the class turn the question on him. The class conducted an interview as part of the host teacher’s assignment. “What would you like your tombstone to read?” the student asked. The speaker paused and finally said that he wanted to be remembered for his faith in Christ. That answer surprised the class and it opened up a number of follow-up questions that no one had anticipated.

This tip worked for them and it will work for you.

Tip: In the November 1991 issue of Campus Life magazine, Nancy Ricker Hoffman suggested that writers emphasize a central point, another name of conflict.

Instead of writing about the list of activities with which a person may be involved, try capturing the central meaning of those activities.

Not: I spent the summer painting houses…

Better: With each stroke of the paintbrush, I learned the truth about myself.

Hoffman also suggests that writers use concrete detail by showing the reader, not telling her.

Better: The fire-engine-red Renault convertible gleamed in the afternoon sun.

Photo by Charles Deluvio on Unsplash