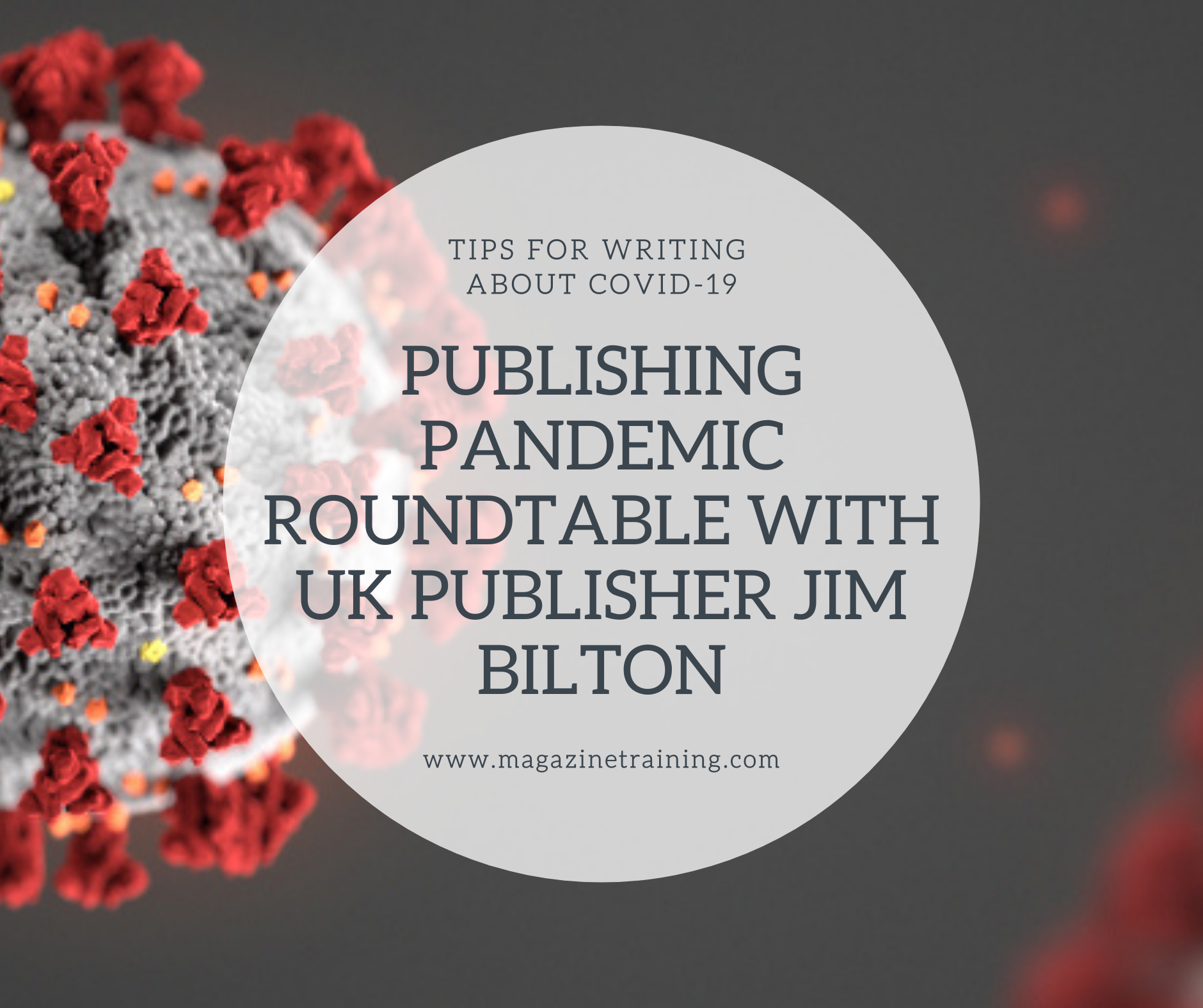 This is Part One of a Two Part Roundtable with Jim Bilton, the Managing Director of Wessenden Marketing. It is re-published with kind permission of Bo Sacks and Precision Media Group. Part Two of the interview can be found here.

Two weeks ago our Publishing Pandemic Roundtable of Joe Berger, Samir Husni, Bo Sacks, Gemma Peckham, and Sherin Pierce was joined by Jim Bilton. Jim Bilton is the Managing Director of Wessenden Marketing. Jim’s knowledge of the UK and the European media supply chain is amazingly complete and thorough.

Bo Sacks: Jim, did I read correctly in your last newsletter that the Travel sector was down 91 percent?

Jim Bilton: Actually it is 97 percent. WHSmith’s Travel division only kept shops open at hospitals. Everything else worldwide, they closed down. They’re beginning to open back up again and their High Street operation is also starting to come back. The health of WHSmith is a big deal for UK publishers – they account for around 14% of total magazine sales. But their whole business model has been turned upside down by the pandemic. A year ago, they were being praised for their smart strategy – investing in Travel, which has included some big acquisitions in the USA, and squeezing costs out of their declining High Street operation. Now everything has flipped. The High Street is the main way of keeping cash flowing through the business until Travel can come back on stream. They were just in the wrong place at the wrong time.

Joe Berger: Is this an example? This also showed up on my LinkedIn feed today. Weirdly enough, Hudson Retail just opened up two new stands in LaGuardia at Terminal B. I would guess, seeing as how there’s nobody around, it’s pretty easy for them to do all the work. This is a store called Madison Avenue Market, and it does have a fairly good size mainline rack and a fairly good availability of paperback books. But the rest of the store, as you can see, is just full of every other kind of tchotchke in the universe. This is another look at the Madison Avenue Market. And again, notice in a traditional Hudson retail store, this area around here will be covered with magazines. That’s gone. Here’s the outside of the Madison Ave. Market.

Joe Berger: Probably. I would imagine that’s the case. So, anyway, that’s life here in the States with us Zoom neophytes and all of the weirdness with our wholesale system.

Jim Bilton: Have you had a hard lock down over the same kind of period that we had? It was week 13 that we started.

Sherin Pierce: Yes, I think maybe in New York it was early.

Joe Berger: You might have a week or two earlier than here in Chicago. But I believe it was that New York locked down on a weekend. And Monday morning, our governor here in Illinois said, OK, everybody, stop it.

Sherin Pierce: In New England, we locked down on March 27.

Gemma Peckham: The last day open was March 17, which I think was a Thursday. And then we took Friday off and we haven’t been back since.

Jim Bilton: And in the U.K., any shop that sells newspapers is classified as an essential retailer, selling an essential service – news. Magazines have ridden on the back of that. As a result, we lost only about 10% of our retail universe at the peak of lock-down. Yet that’s just the number of outlets, irrespective of their size. A chunk of that 10% included some big multiples – the biggest being WHSmith.  The nightmare scenario is that WHSmith never fully comes back on stream again.

Joe Berger: Well, not here in the States.

The other questions that I’ve been finding fascinating, and I put it in our pre-meeting notes, was, we’re obviously very interested in the parent company of Barnes & Noble and how things look for Waterstones. And does this company that’s now invested in B&N have the financial wherewithal to bring this chain back to life and make it a better Publishing corporate citizen?

Jim Bilton: Waterstones is actually a very small magazine stockist. It has a very limited range. Not all their stores have got magazines. So, they’re a bit of an irrelevance in our magazine business. But they seem to be doing the same kind of thing as B&N, which is to self-heal the print products. They go into the storeroom. They don’t go straight back on the shelf. And the Waterstones’ outlets generally are a lot smaller than B&N. So, they’re not reorganizing in a fundamental way as they don’t have that much space to play with. Coming back to WHSmith, space is their issue too. In their High Street business, they’ve been squeezing more and more margin out of their shops. They shove the gondolas closer together. The gondolas go up in height. Some of their smaller shops are really horrible places to shop in – claustrophobic. All this makes socially-distanced shopping a real challenge for them.

Bo Sacks: Is that a new situation or did it exist before Covid?

Jim Bilton: Oh, no, they’ve been doing it for years. They’ve been squeezing all the time. They’ve been performing the absolute impossible. As their top line has gone down and down and down, they still manage to squeeze more and more profits. Their High Street trading profit margins are now well into the double digits, which is a staggering achievement! Their star category is now stationery – high margin and taking up more space in-store. Their book range is tightly edited – with a focus on best sellers and travel and juvenile.  Yet it’s newspapers and magazines that they’re still known for.

by What’s New in Publishing