Understanding conflict is essential in story-telling 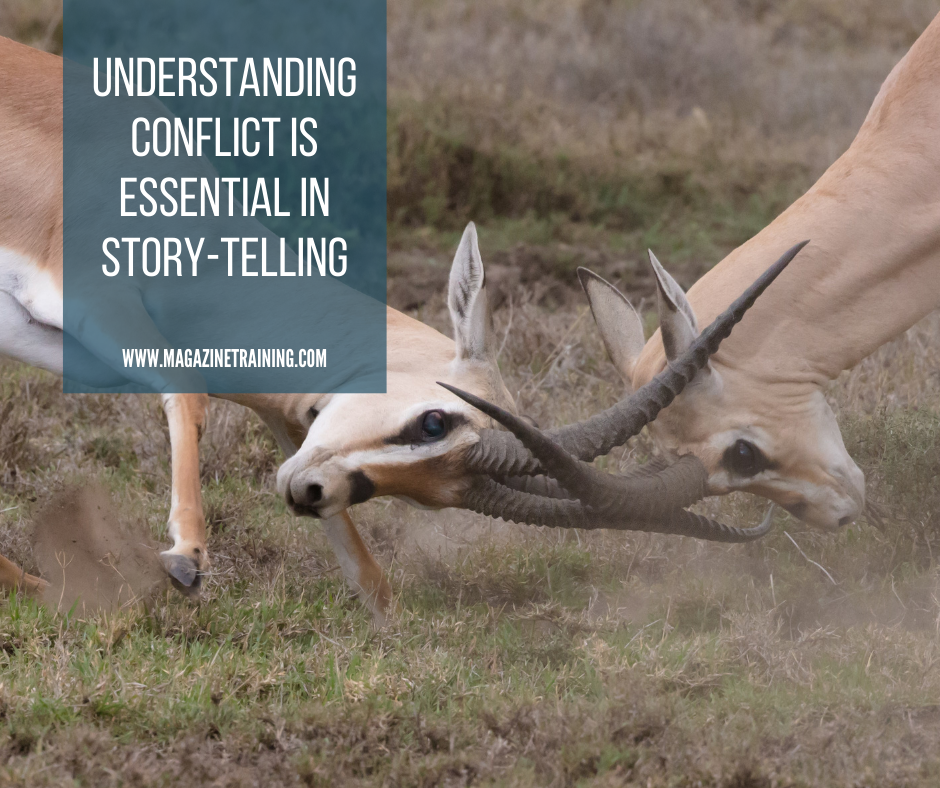 In many ways, writing for publication is like foil-wrapped chocolate. The foil wrapping can be viewed as the central idea of the story. Beneath the foil is a luscious piece of chocolate, detail that supports the main idea. But inside that hunk of chocolate is a sweet almond, a colorful expression that makes your writing sing.

Discover the steps writers use to unearth the sweet spot that’s part of every story assignment. These techniques will serve writers well, whether it’s crafting a news release in public relations, creating a tight argument in advertising or writing a crisp new story. They all begin with selecting the main idea.

Find the conflict, and you’ll find the main idea.

Literature, film, life. All require conflict. Where is the sparkle without conflict? The same idea is true in media writing, but don’t be deceived into thinking that a writer imposes conflict where none exists. Don’t make up the conflict; just ask yourself, “What issues does this story suggest?”

Tip: To gain an appreciation for news writing. Type . . . literally, type . . . the first three paragraphs of a news article from a newspaper. Drug arrests on college campuses jumped 34% but burglary and other property crimes fell for the second year in a row, says a news report. That’s a lead, a first sentence, from Drug arrests up, property crime down at colleges, an article by Anita Manning and Tamara Henry in USA Today’s Life section. Find a lead that you like and type it and the next two sentences! Most people will ignore this technique, but for those who try it, they will gain a greater appreciation for the rhythm and cadence of good writing. The old master Benjamin Franklin taught himself the beauty of a well-turned sentence by copying and then rewriting essays that he found highly readable. It worked for Franklin, inventor, statesman and writer, and it will work for you.

The interview and conflict

A typical assignment for news reporters and writers is to interview a person. Those making assignments, called editors, don’t randomly assign writers to interview just anyone. People are interviewed because they’ve done something notable or can provide information about someone who has. The job of the writer is to unlock as much relevant information on the issue as possible while meeting that crucial deadline. Some assignments will require extensive preparation on the person’s background and demand additional interviews with the subject’s friends and peers. Other stories don’t merit this attention and can be completed with a thoughtful but quick telephone interview. In all cases, the writer must find the conflict that makes this article worth the reader’s effort. Joseph Pulitzer told his reporters in the 19th Century he wanted to read articles that caused him to say, “Gee, whiz.” To surprise the reader, the writer must work hard to mine for a conflict that is appropriate for the article and interesting to read.

Like the chocolate candy, conflict may have many layers. Imagine, for instance, you were in a community where two retired men spend the better part of two summers carving a 40-foot totem pole, complete with colorful depictions of bears, turtles and an airplane. You hear about the enterprise, contact an editor in your area and sell her on a feature. The editor assigns you to write the article, and gives you a firm deadline.

For this article, you make an appointment to meet the men and you show up on time, feeling relaxed, but curious. As you think about the totem pole carving, your mind toys with the question, “What’s the conflict?” The natural conflict is the men could have spent their days sipping hot tea and pondering the heavens, but they chose to use electric grinders to make a totem pole. Find out the reason for the labor and you’ve found the natural conflict. The fact that no one paid them to work day after day on the pole, once an ordinary utility pole, is another layer of conflict. The conflict could include that choice of sites to show off the work of art; in this case, the finished totem pole will be erected near the parking lot of a butcher shop. Let’s say one of the carvers is related to the owner of the shop and carved a vulture on top of the pole as a joke. That element also suggests conflict between the businessman who wants his customers to value his meat and an artist who finds humor in a predator associated with decaying animal carcasses.

Whatever conflict the writer chooses must be one that can be sustained throughout the article. If the article is meant to be humorous, the vulture conflict may be the best pick, but if the men hope to make a political statement about Indian art in rural Pennsylvania, the vulture idea may interfere with the overall concept.

The goal and news qualities

To succeed, it is in the writer’s best interest to pick the conflict that is a natural part of the story and stay with it throughout the article. Keep in mind that the conflict is supported by other demands of the article. All articles must satisfy readers’ questions. In short, relevant articles possess news qualities.

When you pick the conflict, consider the characteristics of news qualities.

Is it timely? Some event happened and people are talking about it. The emphasis here is on the currency of the information. A tragedy last month is dated as a report for a daily newspaper; however, a feature writer with a creative bent can find a fresh angle to describe and use the incident to highlight the action. The September 11, 2001 disaster is of interest today as writers reflect on new angles such as the role of buildings as symbols of capitalism, security issues vs. personal freedoms, the call to fire fighting and police service as an act of commitment to a noble truth.

Is it close? The nearer the event to the audience, proximity, the more interesting the audience
will find that information.

Will it affect a lot of people? The more impact, the newsier the story.

Is it unusual? About once a decade a man will bite a dog… and it’s always news but the reverse isn’t news. Dog bites are common and aren’t typically reported unless the attack is particularly severe such as the case of an animal hurting a child. As you write, keep these ideas in mind as you refine the article’s most salient point.

Photo by jean wimmerlin on Unsplash