Work “with” instead of “for” your audience 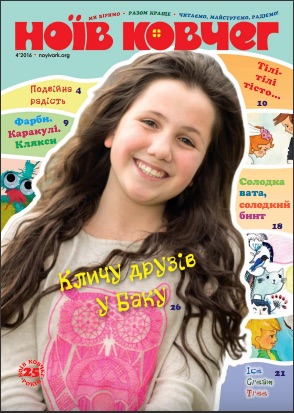 Vera Fesianava is the Associate Art Director of Noiv Kovcheg (Noah’s Ark) magazine in Ukraine, a Christian publication for children. Their mission is to discover the principles of building a happy family life for parents and children through the knowledge of God and his Word. To view the magazine look them up on Issuu. Join us for a Q&A with Vera to learn some tips on how the magazine is working “with” instead of “for” kids:

Q: It sounds like you are doing a great job communicating with your audience and involving them in audience research. I’m curious how you involve children in your team from different cities and countries. What is your strategy for getting feedback from them?

A: It is a long story on how we have built communication with our audience.

In 2010, Noiv Kovcheg celebrated its twentieth anniversary. At the same time, we came to the conclusion that it should be radically changed. Victor Kuzmenko, the founder of the magazine, returned as editor-in-chief that same year. We were looking for a new strategy, and we came to the idea: It’s not our magazine; it’s their magazine. Let’s let the children create it.

In the very first issue of the magazine, published in 1990, we expressed the hope that our cooperation with readers will become a joint service to God… During the years of ministry, we have noticed that often adults do a lot of good for children and much less often together with them. However, if we, the adults, ignore this important factor “together with” in the upbringing of children, kids grow up with distorted ideas about themselves, about God, and about life in general.

When our communication with children is filled with joint activity, they see that they are treated with respect, that they are appreciated, and that–as a result–they develop right next to adults, growing purposeful and open.

Sometimes it seems to us, that we (adults) know what children are interested in, what is important to them, what and how we should talk to them, but often it turns out the opposite. Not without reason, Christ told adults that until they change their hearts and become like children, they will not enter into the Kingdom of Heaven.

In the next issues of the Noiv Kovcheg magazine, we want to listen more to children and see how they live. We are sure that they all aspire to God and dream of the eternal. And we can strive with them and dream about the same on the pages of Noiv Kovcheg.

Thanks to everyone who shared with us children’s creativity. We continue to wait for children’s photos, letters, text messages, poems, stories, humor and funny stories from life, and other children’s treasures.

Since that time, we try to involve children in the creation the magazine in many ways:

The most joyful thing for us is to see how the children learn about Jesus through the magazine, start reading the Bible, grow up, and become Christians. It’s not every child, not much, but it’s worth it.

Q: You mentioned that you have children give direct input to the magazine. I assume these are Christian children from families of believers. Have you ever done a focus group where you gather some children from the audience you want to reach (in this case children from non-believing families), sit them down with the magazine, and have them tell you what they think the magazine is communicating, what they understand and don’t understand, and what they like and don’t like about it? It might be worth a try and it could be very illuminating.

A: Yes, kids in our children’s team are mostly from Christian families, or from mixed families where only one parent is a Christian. But, approximately every two years the composition of the children’s team changes, someone grows up, and new children join. Until this year, the team included local children. Now our strategy has changed. We invited children from different cities and countries onto the team, among them there are one or two children from a non-believing family. They share the magazine in their community with other children, collect feedback, and send us photos and drawings.

At least 5 children from the first composition of the Children’s Editorial Team grew up and became Christians and were baptized.