Trust me, I’m a journalist 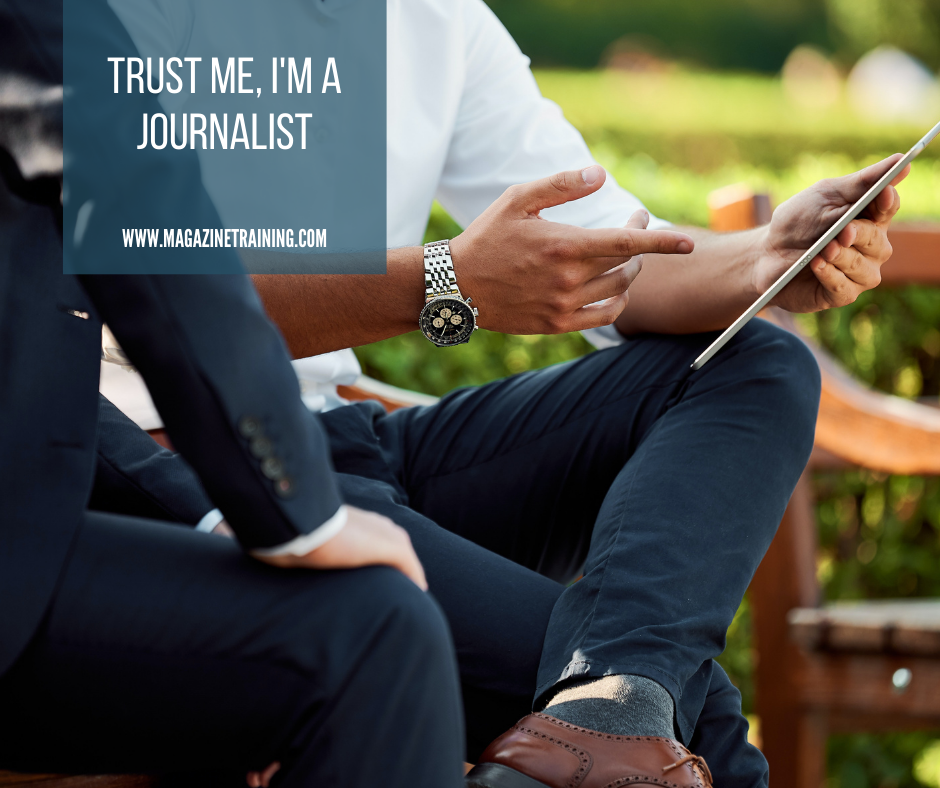 Being a journalist right now is not easy. You face daily menace and harassment from every corner: repressive governments and would-be autocrats, abusive Tweets and Facebook posts, as well as physical threats and an unprecedented risk of being killed for your work. Add to that the chronic stress of working in an industry bedeviled by existential financial crisis.

The reward for coping with all this? Hardly anybody trusts you. According to the 2021 Edelman Trust Barometer Spring Update: A World in Trauma, trust in traditional news media is at a record low (though trust in social media is even lower). While the public’s trust in most institutions (including government and NGOs) isn’t strong, its faith in news media is even feebler. You know it’s bad when people say politicians are more credible sources than us journalists.

Increased political polarization and a swamp of disinformation deserve much of the blame, it is true. Increasingly, journalists aren’t viewed as independent voices, but perceived to have hidden agendas, making them either “with us or against us.” Meanwhile, factbased news is competing for attention with rage-inducing, button-pushing disinformation. Some “bad actors” are actively targeting journalists’ credibility— and too often succeeding, thanks to the enabling environment of today’s social media ecosystem.

Case in point: Intrepid 2021 Nobel Peace Prize winning Filipino-American journalist Maria Ressa. My organization, the International Center for Journalists, working with the University of Sheffield and Ressa’s Rappler news site, recently conducted a forensic analysis of hundreds of thousands of social media attacks against Ressa over the past five years. Nearly 60% of these attacks were specifically designed to undermine her professional credibility and, by extension, public trust in her journalism.

What can be done to reverse this hostile tide? Better self-regulation by the social media platforms would help, as might other policy interventions— though there is currently little consensus about what these might be, and many journalists worry that government actions ostensibly designed to help the media often end up doing the opposite. That is why many journalists believe the best strategy is simply to “put your head down and do your job.”

I don’t believe that’s good enough. It is time for a fundamental rethink of journalism, from how it is produced and distributed to how it interacts with audiences to how we measure impact. Restoring trust requires numerous actions, large and small, that journalists and the organizations that still employ them can take. Think of the suggestions that follow not as some kind of shovel-ready blueprint for change, but rather as an initial exploration of possible steps that might make a difference.

One suggestion comes from an unexpected source: Pope Francis. The pontiff recently articulated a vision for journalism that speaks directly to rebuilding a culture of trust. The journalist’s mission, he said, is “to explain the world, to make it less dark, to make those who live there fear it less and look at others with greater awareness, and also with more confidence.” In other words, don’t stop at uncovering dark doings; supply the light, too.

Many journalists, of course, are already doing plenty of both. They reveal the “dark doings” by helping bring down corrupt governments in Slovakia, uncovering human trafficking rings in Nigeria, and documenting an escalating hunger crisis in Afghanistan. They also provide some light, reporting on the lives of people in São Paulo’s most under-resourced and under-covered communities, on successful voter turnout efforts in the Navajo Nation, on what countries can learn from Estonia on cybersecurity, and on and on.

Without cutting back on essential investigative journalism that exposes problems, are there other smart ways media organizations can figure out how to do more reporting on solutions? And how else can newsrooms evolve their coverage to be more relevant to readers? A few suggestions:

Photo by Medienstürmer on Unsplash