Tips for reporting on Russia’s invasion of Ukraine 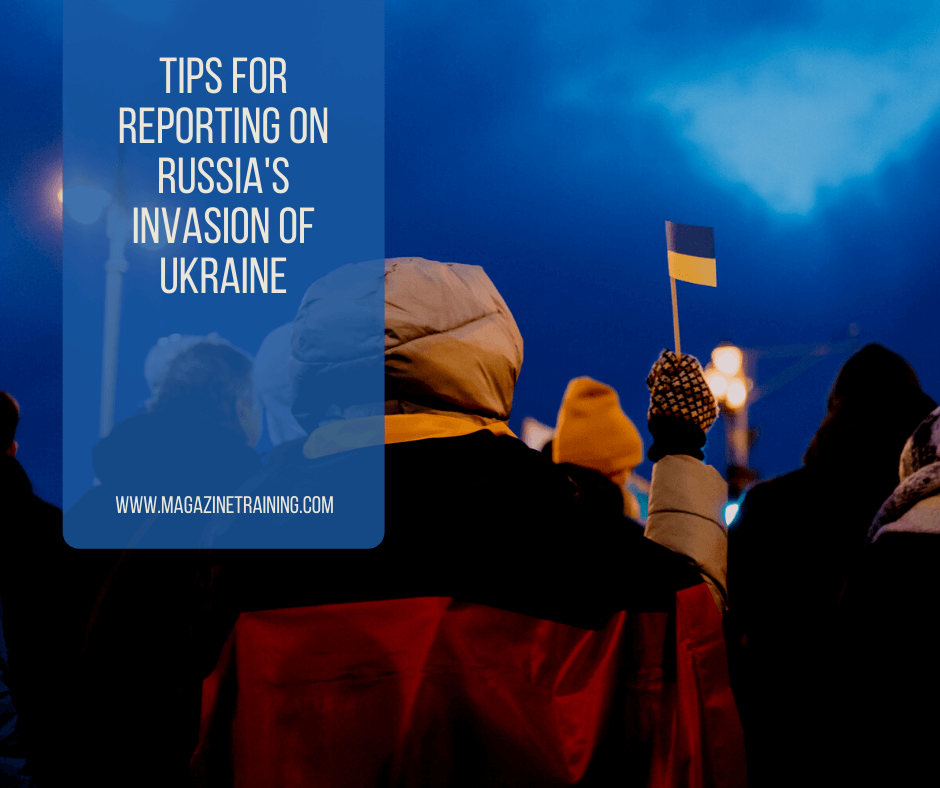 Early in the morning of Thursday, February 24, Russia launched a full-scale invasion of Ukraine, in what is the most significant military attack in Europe since World War II. Ordered by President Vladimir Putin, Russia’s invasion follows its annexation in 2014 of the Crimean peninsula, and eight years of support for separatist rebels in eastern Ukraine since.

In an ICFJ Pamela Howard Forum on Global Crisis Reporting webinar, ICFJ Director of Community Engagement Stella Roque spoke with two journalists reporting closely on the invasion: Ostap Yarysh, an international reporter with Voice of America’s Ukrainian Service based in Washington, D.C., and Tom Mutch, a freelance journalist covering crime and conflict on the ground in Kyiv, Ukraine.

At the time of the interview, both Yarysh and Mutch had been working around the clock since the initial stages of the invasion. They shared important information for fellow journalists around the world covering the war’s outbreak, and offered advice for how best to report on the conflict for international audiences.

The Russian invasion of Ukraine might seem distant or far away, especially if you aren’t based in Europe, but the ramifications have the potential for long-term global consequences. “One thing that I think has such worldwide relevance is the idea that we have this imperfect, rules-based international order,” said Mutch. “The biggest tragedy of the Ukraine crisis, along with the suffering of the Ukrainian people, could be the idea that if Russia gets away with enforcing its political and diplomatic aims by military force, this sets an example not just for this particular region but for the world.”

Yarysh agreed. “Especially when we talk about dictatorships and other authoritarian countries like China or Iran, this could set a pretext for them, that they might be unpunished for their actions as well,” he said, further noting how the war could affect closeby countries, including NATO member states, potentially. “We see that this is not only eastern Ukraine, that there are some facilities and cities that have been shelled that are within 15 miles to Poland, which is a NATO country.”

Understand the language and context

“First, the important element for both sides – here in the U.S. and people reporting in Ukraine — is the correct translation of things,” said Yarysh.

Mistranslations run the risk of unintentionally spreading misinformation if not double-checked. This is an especially prevalent concern during a rapidly developing story, and if your newsroom doesn’t have a native speaker on staff.

It’s critical that journalists communicate clearly the dynamics of the conflict, Mutch added. “While you can make a point that Russia has legitimate security interests about NATO expansion, there is absolutely nothing that Ukraine has done to ever justify what has happened and what is going on now,” he said. “It is in cases like this to show that, while you give perspective of the aggressive side — in this case Russia —  you point out that they are the aggressor in this situation.”

Communicating these facts to readers helps pierce through misinformation that seeks to obscure the true nature of Russia’s actions. “This is not only a physical war, but also a war of information,” Yarysh said.

Photo by Dovile Ramoskaite on Unsplash