…the one response she needed. 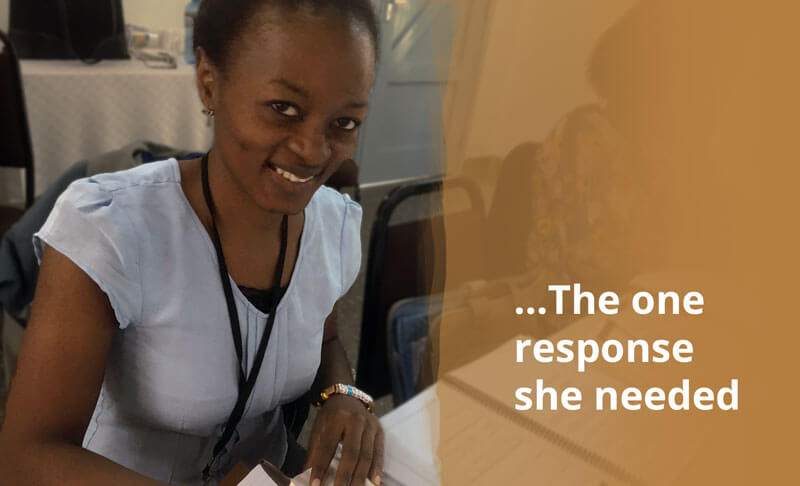 The email that launched a career

“You say this is MTI’s first time in Africa,” said the quiet young woman. “But for me, MTI was in Cameroon 10 years ago.” When Ivanova Nono Fotso asked to share her testimony at the Magazine Training Institute in Kenya, her astonishing statement took everyone by surprise. Even more surprising was the revelation that a simple email from MTI President Sharon Mumper a decade ago changed the course of her life.

The email was typical of those MTI staff receive daily from hopeful publishers around the world. Sharon didn’t know Ivanova or her hopes for a future as a writer. Nor did she know that Ivanova had already found a copy of MTI’s writing manual in Cameroon and read it cover to cover.

“No, we can’t accept your articles,” Sharon told Ivanova in the email, “because we don’t have a magazine.” However,” she told her, “there is a French publisher who publishes a magazine called Jouv’ Afrique in Africa.”

It was the only response Ivanova received from the many inquiries she had sent; but it was the only one she needed. Armed with Greg Burgess’ email address, Ivanova contacted him, finding a ready mentor looking for writers to address the needs of French-speaking youth in Africa.

Over the years since that initial contact, Ivanova has contributed to or directed several projects including a set of books for pastors, articles and scripts for Jouv’ Afrique, and “Eclats Bandes d’Afrique,” a comics collection for Francophone youth. Ivanova’s children’s book “Meme Pas Peur,” which helps children cope with their fears, was recently published in France.

After the Institute in Kenya, where Ivanova took the editing course, she said that her new-found skills will help her become an even more effective writer and publishing professional. Her new skills are already being noticed, as she was recently asked to guide the publication process of the new African-authored-and-illustrated Graphic Novel Bible, a major project by Comix35, Editions Cle, and Publications pour la Jeunesse.

In God’s grand story, a simple email, a small gesture, a gift to support a cause or ministry, can be life-changing. For Sharon, her response to Ivanova was “routine,” the kind of email she sends daily. For Ivanova, that response was anything but routine. Ivanova’s testimony reminds us that all of our efforts, when done for God’s glory, can have a lasting impact.

Please consider making a donation to give leaders like Ivanova the tools they need to reach their community.