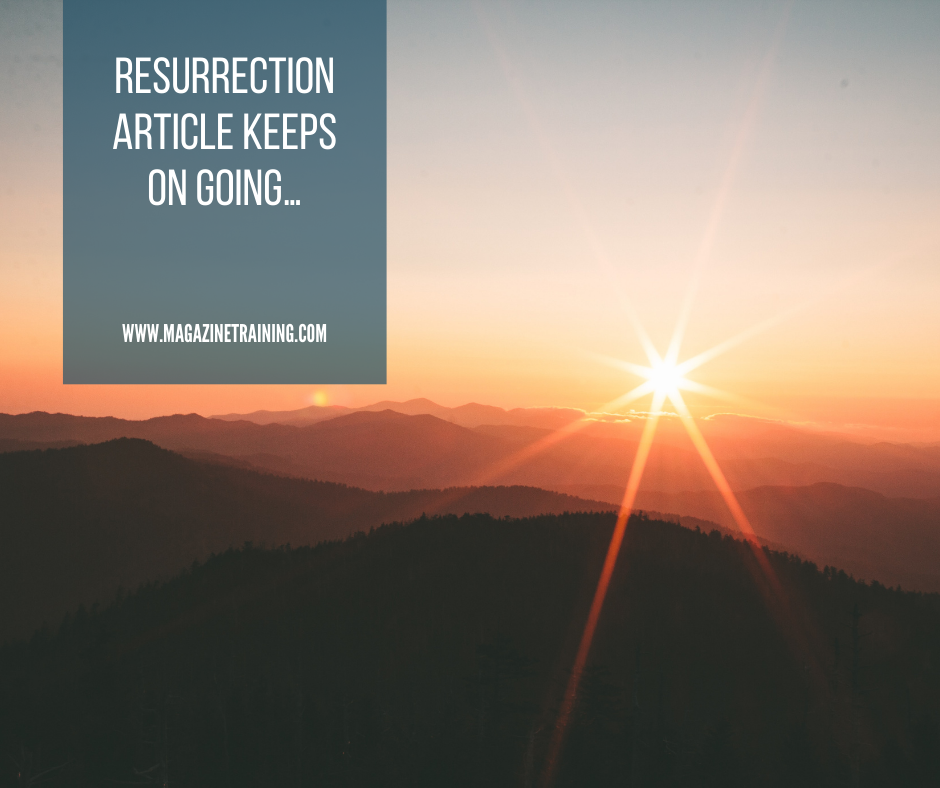 “Why doesn’t somebody do something?”  Ever ask that question?  Maybe that “somebody” should be you.  The results might surprise you.  Perhaps this story of God at work will encourage you.

A few weeks before Easter in 1971, I began to wonder why no one had published an article on evidences for Jesus’ resurrection in our university newspaper, the Duke Chronicle.  I was in my final year at Duke and had been following God for about three years.  Our campus considered itself intellectually sophisticated, I reasoned.  The resurrection evidences were sound; students and professors needed to know this.

“Why doesn’t someone write this article?” I grumbled to myself.

Then, after several days I began to wonder, “Maybe I should write it.”

What a novel idea!

Incorporating insights from my mentor, Bob Prall, and others, I wrote the article and took it to the editor, who was Jewish.  He read it as we sat in his office; I prayed silently that he would run it.  After a few minutes, he looked up and asked, “Can we put this phrase in italics?”, referring to the punch line at the end of the evidences: “Christ is risen.”  While I had been praying, he had already decided to use it.

It ran opposite the editorial page (here, page 7).  Encouraged by this reception, I approached the local city newspaper late one afternoon, but encountered a lone editor on deadline who was too busy to talk.  Next door, I showed the article to the local radio station manager, who very warmly invited me to record it in his studio for broadcast that weekend.

God had used my efforts to spread His word – and the truth that Jesus lives – via the mainstream, secular media.  This excited me.  But I had no idea what lay ahead.

The Lord began to use other versions of the short article.  Campus Crusade for Christ published it in a newspaper distributed at their Explo ’72 music festival in Dallas featuring Johnny Cash, Kris Kristofferson, and Billy Graham.  An estimated 150,000 attended.  Later CCC (now called “Cru”) used it in a nationally-circulated university outreach publication.  Students and campus workers worldwide used reprints as conversation starters.

Local newspapers small and large in the US ran it – from the North Myrtle Beach Times to the Long Beach Press-Telegram.  Over time – now over five decades and counting – it’s taken on a life of its own.

The fact that Easter keeps rolling around each year certainly helps.  The Manila Bulletin, in the Philippines, published it in their Easter Sunday edition (250,000 circulation).  The Salvation Army ran it in their Easter War Cry magazine (1.2 million circulation).  The American Tract Society turned it into an outreach pamphlet in English and Chinese.

Now it’s on the web and – by God’s grace – has been used by websites and publications based in nations including the US, Canada, India, United Arab Emirates, Australia, the UK, Brazil, and Mexico.  A Chinese website uses it in text and audio formats to help Chinese speakers learn English.  People send it in emails to their friends and acquaintances.  Like the Energizer Bunny®, it just seems to keep on going, and going and going.®

God gets the credit for all this, of course.  He did the raising; I simply told the story, as have many others.

You can use it, too

You can use the article, too, gratis (the simple republishing permissions information is here).  The article is here in English, Spanish, French, Portuguese, and Chinese.  Maybe it can help your readers or someone else you know understand that Jesus lives, loves them, and wants to meet them.

So, the next time you find yourself grousing about “Why doesn’t somebody do something?”, be careful.  God may have a task ahead for you.  You never know where it might lead.

by Rusty Wright, an author and lecturer who has spoken on six continents.  He holds Bachelor of Science (psychology) and Master of Theology degrees from Duke and Oxford universities, respectively. www.RustyWright.com

Photo by Ivana Cajina on Unsplash