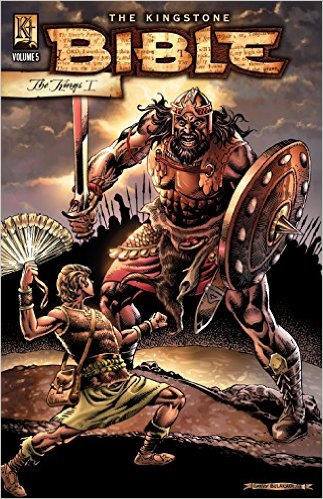 Magazine Training International is pleased to announce that trainer Nate Butler was involved in the recently released graphic novel The Kingstone Bible, Vol. 5.

The Kingstone Bible is the most complete graphic adaptation of the Bible ever done. The 2000-page, twelve-volume collection illustrates in exquisite detail the grand story of the Bible. Each volume is a rich narrative sequentially illustrated to teach and explain the major stories and themes in the Bible in a historical and chronological manner. The book features more than 10,000 art panels. All images were done by hand with pen and ink by more than 45 industry-recognized artists. Volume 5 covers the biblical era of Ruth, Samuel and David.

Butler is credited as a writer and designer for Vol. 5. He wrote the script for the section on Ruth, helped find a few of the artists, and contributed with some art directing and editing. He also assisted with the sections on Job, Abraham, Hebrews, Hosea, Isaiah, Samuel, and others in various ways.

The Kingstone Bible will be available in multiple languages beginning Oct. 18, 2016.

Butler is the president of COMIX35, a Christian comics ministry that has offered international consultation, coaching, and classes on the production and effective use of comics-style literature since 1996. He serves as the main coach and consultant for the ministry and the lead instructor at COMIX35 seminars. Butler worked for more than 20 years as a cartoonist, commercial artist, and writer/illustrator of comics before going into full-time ministry in 1999. His former company, The Nate Butler Studio, Inc., produced artwork for clients such as Jim Henson Productions and DC Comics, as well as script writing for Archie Comics and Marvel Comics. He was also editor/co-publisher/packager of Christian Comics & Games Magazine, and editor/publisher of Christian Comics Catalog. Butler has also served as an MTI trainer at conferences in Romania and Croatia and as a live workshop presenter.