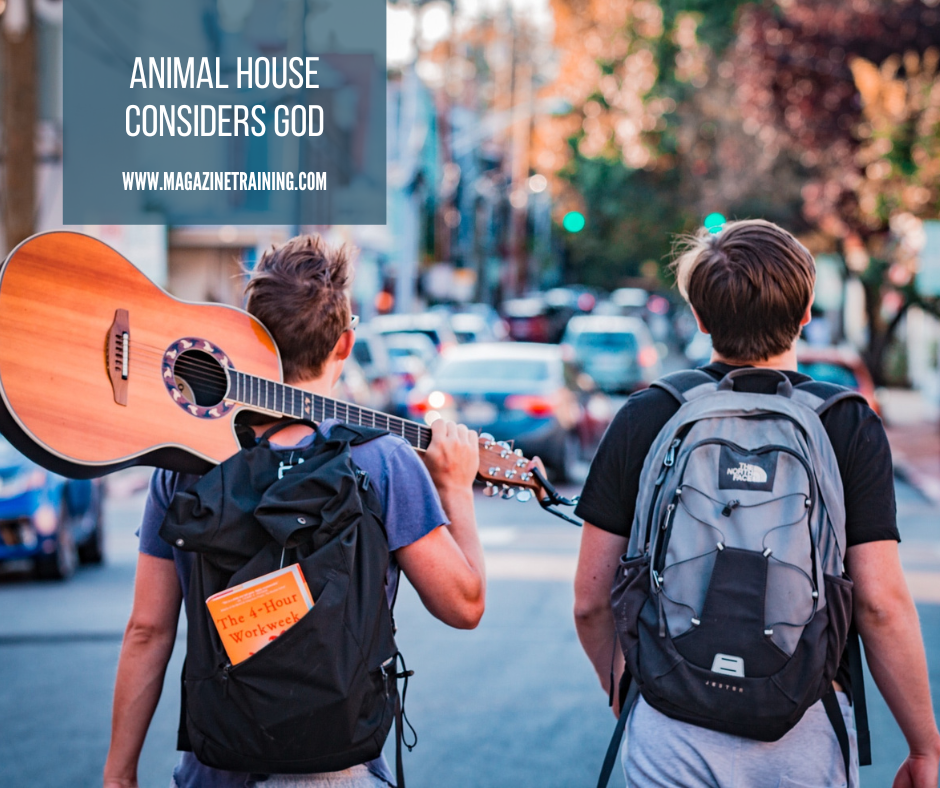 How would you like this kind of introduction for your speaking engagement?

The terrazzo floor is glazed with stale, dry beer from the weekend’s wild party.  As students stream into the dining room, it is obvious that no self-respecting cockroach would have wanted to live in the adjoining kitchen.  A few composite portraits of members hang – somewhat askew – on the paneled walls.

The room buzzes as the sixty men swap stories and engage in friendly banter.  Then their leader gavels them to order.  Welcome to the fraternity chapter meeting.

First up is a profanity-laced tirade by the president condemning two rival University of Miami fraternities (men’s social groups) and a UM campus administrator.  Next an officer blasts some members for lagging participation.  A sharp crack of the gavel awakens a sleeping brother, who responds with a middle-fingered salute.

The president declares that he himself is “stressed out and can’t wait to get away for Spring Break so I can get drunk and [have sexual intercourse with] some chicks I don’t know.”  A few minutes later, he announces a “speaker who has come to talk to us about brotherhood.”

As you step up to speak, you might be thinking, “So, I break my back raising support to get to do this?”

Some friends, Christian campus workers at the University of Miami, lined me up to speak at this fraternity.  Ken and Robert were especially eager to reach the campus “Greek” community (fraternities and sororities – women’s social groups – with Greek-letter names).

Of course, fraternity and sorority members have no special standing in God’s eyes.  But Greeks are leaders on many North American campuses, with significant potential influence for Christ.  That they often live together can help facilitate small groups and discipleship.  Ken was a member of this fraternity on another campus, as was I, and his relationships in the Miami chapter helped open doors.  We prayed that God would work through this meeting.

My opening joke “bombed” (fell flat) and it took a short while for the audience to loosen up.  Stories and illustrations about communication skills, conflict resolution and brotherly love seemed to connect; they laughed and appeared more relaxed.

The chapter advisor had told me that internal feuds were eating away at his men.  As I spoke, I couldn’t help but think that the Holy Spirit had arranged this presentation on this topic for this audience at this moment.  So that you might catch a glimpse of what went on that evening, here’s a bit of what the men heard.

We discussed communication, conflict resolution and unconditional acceptance.  My first year in university, two other pledges (aspiring members) and I took my fraternity “big brother” (an older student mentor) on a “road trip.”  We borrowed his car (he was quite generous), took him to dinner, then drove to a remote location with plans to strand him there.  All went according to plan until we got to the remote location.  Somehow he overpowered us, grabbed the keys and drove off, leaving us to find our way home!

Of course, we were red-faced.  Eventually, his forgiveness soothed our embarrassment.  In the same way, these men to whom I spoke could forgive when wronged but care enough to confront when appropriate.  Balancing truth and grace can be challenging.

Some questions helped them analyze their own attitudes and “brotherly-love quotient:”

Number six may be the ultimate test of brotherly love!

How do you get the internal power to love and accept others unconditionally?  I related to these men that as I struggled with this question, some friends suggested I consider the spiritual dimension.  I learned in coming to faith as a first-year student that God can provide inner power to enhance life and relationships.  As I spoke, I prayed God’s truth would sink in.

The men seemed fairly attentive and gracious in their applause.  Had the Holy Spirit penetrated hearts?  The men’s written comments gave us some clues.  Some samples:

Outward arrogance, wrath and lasciviousness sometimes mask empty hurting hearts.  Ken continued his ministry in that house.  Two years later, the chapter gathered at 11:00 pm to hear a Christian perspective on sex.  When my host and I departed after midnight, several men followed us out the door with heartfelt questions.  Animal house was not a sanctuary, but God was at work.

Lessons for Communicating in Secular Universities

Consider some lessons from this story that relate to one-on-one, small group and public speaking situations.

Photo by Austin Distel on Unsplash