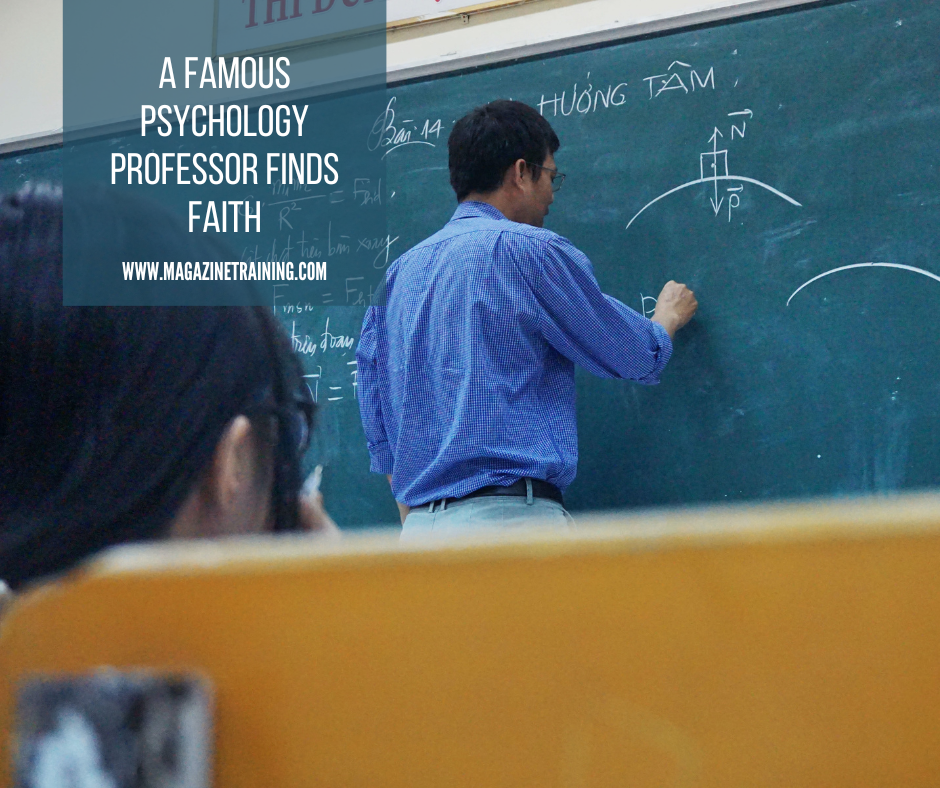 He was a famous professor at a major university, author of widely used textbooks.  Would he have any interest in Christ?

What feelings might the words “secular university professor” engender in you?  Maybe you recall skeptical professors from your past and feel fear or shame that you lacked the knowledge–or courage–to answer their objections to Christianity. Perhaps you raised concerns in class and remember the pain of public disrespect.  Did a friend’s faith falter in the classroom?  Do you feel anger or sorrow?  Maybe your kind but unbelieving neighbor is a professor and you wonder how to communicate your faith to him or her.

Secular university lecturers can significantly influence generations of students.  Campus Christian workers and others can experience faith-stretching adventure in communicating Christ to secular faculty members.  Here’s a story that might encourage you.

As a young believer, during my third year at Duke University, I wrote a paper for an Abnormal Psychology course discussing a biblical therapy for anxiety.  My own experience of God’s peace plus understanding anxiety’s role in many psychological disorders fueled my personal and academic interest in this topic.   A good friend advised me against writing on this theme, fearing academic repercussions.  But it seemed to me the right thing to do.

I mailed a copy of the paper to the author of our textbook, Dr. James C. Coleman, a prominent psychologist at the University of California at Los Angeles.  His warm response surprised me.  He liked the paper, said he would read it to his students and asked permission to quote from it in his textbook revision.

I picked my jaw up off the floor and said, “By all means!”  Actually, I first sent a copy of his letter home to my parents in Miami so they would see their son had not gone overboard with campus Christian involvement.  (They were beginning to wonder.)

That summer, during a California conference, I called Dr. Coleman to ask if we could meet briefly.  He was quite busy but asked me to call back before I returned home.  My last day in California, Betty, a friend, and I had an afternoon to spend in Los Angeles while another friend attended a wedding.  We were trying to decide whether to visit Dr. Coleman or go to the beach.  Spiritual giant that I was, I voted for the beach.  Betty suggested we visit Dr. Coleman.

As we drove up to his lovely Malibu home overlooking the Pacific Ocean, I reviewed evidences for faith.  This man was brilliant and I expected lots of questions.

He was a very warm and gracious host.  As we sat in his back yard, he did not ask much about evidences.  Rather he confided, “I don’t have this peace of mind that you do.  I don’t have this relationship with Christ.”  I told him briefly how I had come to faith and showed him a short presentation of Jesus’ message based on John 3:16.

Glued to the Gospel

Understand the scene.  A college student was reading this famous professor a little booklet about Christ.  And he was glued to it.  Hearing Revelation 3:20, he noted, “That’s powerful.”  At one point, he said he felt that it didn’t matter what you believed as long as you were sincere.

I noted that roach tablets taken mistakenly in the sincere faith that they were aspirin would not cure a headache; they’d probably make you sick.  The object of faith was important, and Jesus was a trustworthy object.  He responded that he now realized one could be sincere but be sincerely wrong.

Soon, Dr. Coleman bowed his head and asked Christ to be his personal Savior.  He had heard this message many times – his father was a minister – but he had never understood how to place his faith in Christ.  We discussed assurance and growth; he took some literature to share with his students.

A month later, he told me by telephone, “Now, as I look our over the ocean and see the setting sun, I really believe that I’m a part of all this.  Before I didn’t but now I do.”  He was seeing how he fit into God’s universe.

The next edition of his textbook contained a short portion about “Religion and Psychotherapy” and included part of my faith story.  I began telling psychology professors I was a case in this abnormal psychology textbook.  Many invited me to speak in their classes.  This helped launch a speaking ministry that has taken me around the world presenting Christ in academia and the media.

Not wanting him to feel exploited, I’ve asked Dr. Coleman several times how he would feel about me telling others what he has told me.  He has always encouraged me to freely communicate our conversations since academics need to understand that there is something beyond the physical realm.  His adult life had been devoted to resolving others’ psychological problems, yet he felt a need to link with the Greatest Psychologist.

God can use you as a campus pastor, student or volunteer to influence secular universities for eternity.  What lessons might this encounter have for university outreach among both students and professors?  Consider a few.

Scratch where they itch.  Dr. Coleman’s textbook indicated his professional interest in anxiety.  When we met, I discovered he also had personal interest.  Everyone has felt needs – perhaps for peace, love, friendship, or security – that can become bridges to real needs, such as Jesus.  Learn where those whom you seek to reach are itching; then scratch there.

Transcend differences in background, status and philosophy.  You may feel awkward relating to others whose education or social status differs from yours.  Yet Jesus transcended social and cultural barriers with the Samaritan woman (John 4).  Paul did with the Greek philosophers at Mars Hill (Acts 17).  You can, too. Learn about those you seek to reach and play the cards you have, establishing common ground where possible.

Realize that friendliness, sincerity and authenticity go a long way.  I could not match Dr. Coleman’s academic credentials or reputation.  But we connected through common interests and similar desires for personal peace.

Do your homework, if necessary, to learn how to answer common questions and objections.  Rarely will you argue anyone into the kingdom, but evidence for faith – tactfully presented – may help remove barriers. The resurrected Jesus showed His wounds – evidence of who He was – to doubting Thomas.

Take appropriate risks.  One friend (whom I dearly love) advised against writing a biblically themed paper.  I couldn’t foresee then the paper’s broad eventual impact but I sensed God was in this and that it could be a witness to my professor.  It may be scary for you to approach certain people with the Gospel.  If God is in it, do it anyway.

Follow wise counsel.  I wanted to relax at the beach that afternoon.  Betty thought we should visit Dr. Coleman.  I’m glad I listened to her!  What multiplied Gospel opportunities might have evaporated had I caught rays instead of spread the faith?  Discerning wise from unwise counsel is not always simple.  (After all, don’t we all need relaxation?)  Listen to others’ advice and use biblical criteria to ascertain its wisdom.

Pray.  I prayed when I sent Dr. Coleman the paper and as we drove to his home.  I’ve prayed for his continued spiritual growth.  “Devote yourselves to prayer,” wrote Paul (Colossians 4:2 NASB).

Meet on their turf.  In Dr. Coleman’s home, we could talk privately and visit as friends.  Similarly, conducting campus outreach on unbelievers’ own turf – the dormitory, fraternity or sorority / social group house, sports facility, classroom, office or cafeteria – can create comfort that facilitates clear reflection.  This principle is not inviolate:  Your coffee house or ministry house may provide a warm, friendly setting.  But be willing to go to those you seek to reach.

Answer questions using Spirit-led wisdom.  Some objections to faith are merely smokescreens.  Once, I privately asked a skeptical Georgia Tech philosophy professor who had me speak to his class if he would place his faith in Christ if I could answer all his questions to his satisfaction.  His reply: “(Expletive deleted) no!”  Other questions are genuine, as was Dr. Coleman’s about “sincere faith.”  Ask God for wisdom and sensitivity as you decide which questions to spend time on and how to answer them.

Draw the net as appropriate.  Of course, not everyone on campus with whom you share the Gospel will be ready to take the plunge into faith.  But if the setting in a group meeting or private discussion is appropriate, tactfully invite others to receive Jesus’ free gifts of forgiveness and eternal life.  Angels will rejoice when people pass from death to life.  And you never know how your faithfulness might open doors for the truth.

Photo by Tra Nguyen on Unsplash