Estimates of COVID-19’s impact on journalism fail to count freelancers, whose livelihoods have vanished overnight 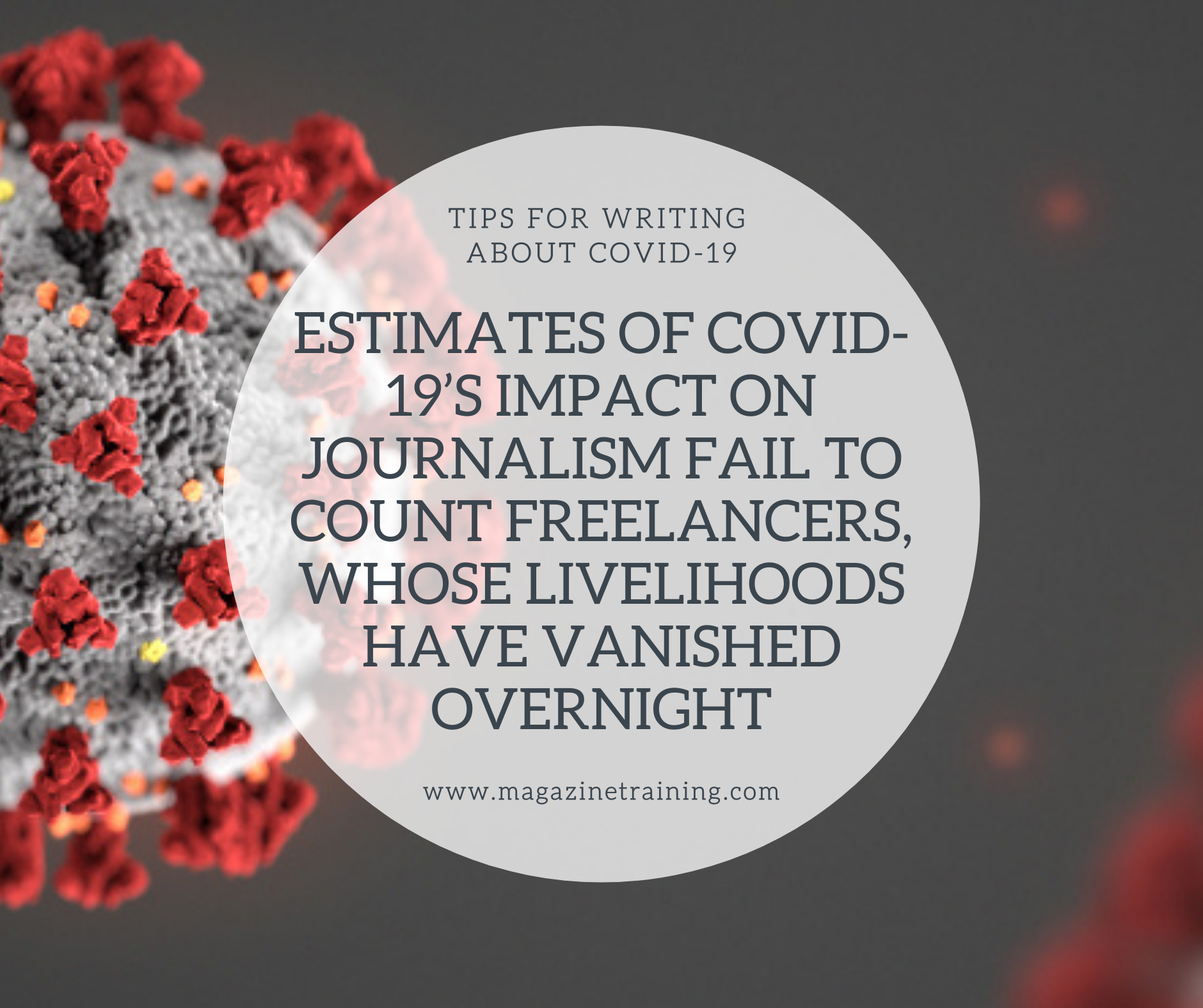 When the crisis has passed, and our profession begins to dust itself off and rebuild, the real toll of the damage will never fully be counted.

While nearly every industry is facing layoffs due to the coronavirus epidemic, journalism is bearing a particular brunt. The New York Times estimated in April that 36,000 workers at news outlets had been laid off, or had their positions reduced, since the beginning of the outbreak. Legacy publications and new media alike have slashed their rosters, and national and local outlets are being forced to make difficult decisions about who will stay, and who will go.

But as dire as these figures are, they fail to provide a complete picture of the devastation to the industry, because they fail to account for freelance journalists, many of whom have seen their livelihoods vanish overnight, and who do not have unemployment and other protections.

The true cost to journalism is much greater.

One only has to look at the recent articles bemoaning media layoffs to see a disturbing trend: Nearly none account for freelance journalists or contractors.

The New York Times article makes no mention of freelance or contract workers, on which the New York Times, like so many outlets, has relied, particularly in the higher-risk foreign assignments.

In its media layoff round-up list, Forbes — which has long relied on unpaid “contributors” to fill its content — makes a nod to freelance budgets being slashed at just one outlet.

When the impact to freelancers is mentioned, it’s told through the perspective of a few journalists, as in this CNN article which fails to mention that last year, CNN told their freelancers that they wouldn’t be paid until 90 days after invoice, which is typically after publication.

To report on freelance journalism, and journalists properly, media outlets would have to contend with their own relationships with their freelancers, their complicity in the current state of the news media, and how the erosion of salaries, employer-paid health insurance, unemployment insurance, formal employment networks and other protections have placed these journalists at unprecedented risk during the coronavirus epidemic.

Despite this, many freelance journalists are still reporting, albeit without the protective gear and crew that staff journalists would have, in similar situations, for the pennies on the word pay many will receive for their work. Or worse, they’re expected to provide it themselves, out of pocket, if they’re able to find a place to buy it at all.

But, as their work dries up and their safety nets fail, they have neither quit nor been fired; and so, when it comes to the toll of the coronavirus on our profession, they are simply … not counted.

There are no solid figures for how many people are currently working as freelance journalists, nor are there any for how many of them are now out of work. Two surveys conducted by the Freelancers Union of their members in March (5,247 respondents) and April (3,163 respondents) found that 80% of respondents who self-identified as journalists had lost work by end of April, whether that’s having pending contracts canceled or in-progress work being halted, while only 67% reported having lost work a month prior, at end of March. 51% of journalists who responded to the survey in April reported having lost more than $5,000 in income since the crisis began. Journalists represented 13% of the survey respondents.

While this measures a fraction of the work lost, it’s impossible to measure work never attained —  the articles not assigned, the pitches not responded to, the work that never materialized, the fellowships and grants canceled — because of the coronavirus.

Study Hall, an online media community that offers resources for freelancers, has compiled an ongoing list of outlets that have stopped commissioning freelance work; those that are still commissioning, albeit on a restricted basis; or have reduced their rates.

To those not familiar with the freelance journalism industry, the list of commissioning outlets can be misleading. As someone with a decade of freelance experience, an expansive network and a strong portfolio of legacy bylines and fellowships, I, too, have recently, and frequently, had pitches rejected by many of the outlets on the list, even before the crisis. This is part of the hustle of being a freelance journalist.

Since the coronavirus pandemic began, however, I have seen six months of assignments, speaking engagements and trips vanish because the things I was meant to be reporting on, like conference and lectures, and field-based reporting, were suspended indefinitely. Laboriously-crafted grant applications have been rendered moot after funding rounds have been canceled or suspended indefinitely. Returned emails are a rarity, even from editors with whom I’ve worked, and rejections are so frequent, they’re becoming demoralizing. Four months in, there’s no telling when, if ever, my normal workload will resume.

Whether due to the recent coronavirus pandemic or years of being slowly, steadily squeezed out by shrinking rates; overburdened and unresponsive editors; staff layoffs that create new freelance competition; or pay that comes too late to pay rent, or not at all, many freelance journalists and media professionals are finding our profession simply too untenable to pursue. And there’s no way to measure the toll on our mental health that this all can take.