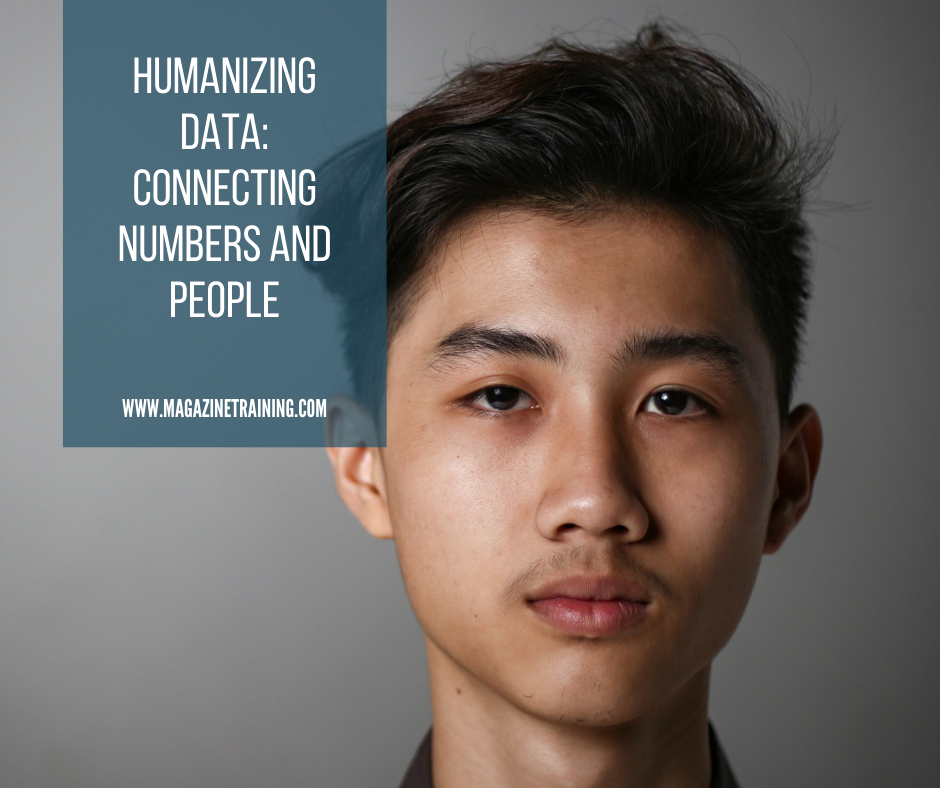 Humanizing data is all about breathing life into numbers. Doing so successfully is the challenge journalists face as they cover global events, from the pandemic and migration to  conflict and terrorism.

Data literacy trainer Tricia Govindasamy reminds reporters that data scientists generate valuable statistics, but she cautions: “A spreadsheet is just numbers until a human face is put to them.”

The data product manager for Code for Africa, Govindasamy coaches reporters on how to take a new slant on something they already do well: interviewing. When faced with a data set, reporters should question the numbers as if they were a person. Interviewing the data can flesh out story ideas, identify new angles and lead to human sources, said Govindasamy.

If a data set documents devastation caused by flash floods, for instance, the reporter should study the numbers to determine: Which villages were affected? Where are the survivors now? How many lost loved ones? With this information, reporters are able to humanize the tragedy. Data becomes a guide to the human condition, helping create change, accountability and impact that otherwise might be ignored.

Govindasamy cited The Pandemic Poachers as an example of how humanizing data strengthened a story. For their report, InfoNile interviewed local communities about the consequences of the pandemic as restrictions halted tourism and impacted daily life. “The human touch brought the issue to life,” she said.

Scientific research supports Govindasamy’s premise. Psychologist Paul Slovic uses the terms “compassion fade” and “psychic numbing” to explain how the brain responds to numbers that have no human connection. “If readers don’t relate to the information, they are less likely to act and use it,” said Slovic, who is a member of the National Academy of Sciences and the president of Decision Research, a collection of scientists who study the human psyche. His advice: “Don’t just throw numbers at people. That’s the worst way to go about it.”

This begs the question: How useful are data sets if they don’t resonate with the audience?

Slovic expands this theory in a co-authored paper about psychic numbing. “Large numbers have been found to lack meaning and to be underweighted in decisions unless they convey affect (feeling)…On the one hand, we respond strongly to aid a single individual in need. On the other hand, we often fail to prevent mass tragedies — such as genocide — or take appropriate measures to reduce potential losses from natural disasters,” reads an excerpt. “We believe this occurs, in part, because as numbers get larger and larger, we become insensitive; numbers fail to trigger the emotion or feeling necessary to motivate action.”

Case in point: When the body of two-year-old Syrian refugee Aylan Kurdi washed ashore in Turkey in September 2015, a photograph capturing the image went viral, sparking an outpouring of aid for refugees and policy changes on migration.

The death toll in Syria numbered in the hundreds of thousands with scant international response. Suddenly, a tiny corpse face down on a beach moved the public in ways statistics could not. “Overnight, that picture woke up the world. People got emotionally connected to the problem,” said Slovic. “Generally, if there’s something people can do to help, they will do it. If they don’t feel they can make a difference, they get turned off.”

He advises journalists to:

The following are examples that exemplify the relationship between numbers and the human condition.

The New York Times won the 2021 Pulitzer Prize for public service for chronicling the toll of COVID-19 at home and abroad.  “We strove every day not to be so focused on the numbers that we forgot the people behind them,” said assistant managing editor Marc Lacey.