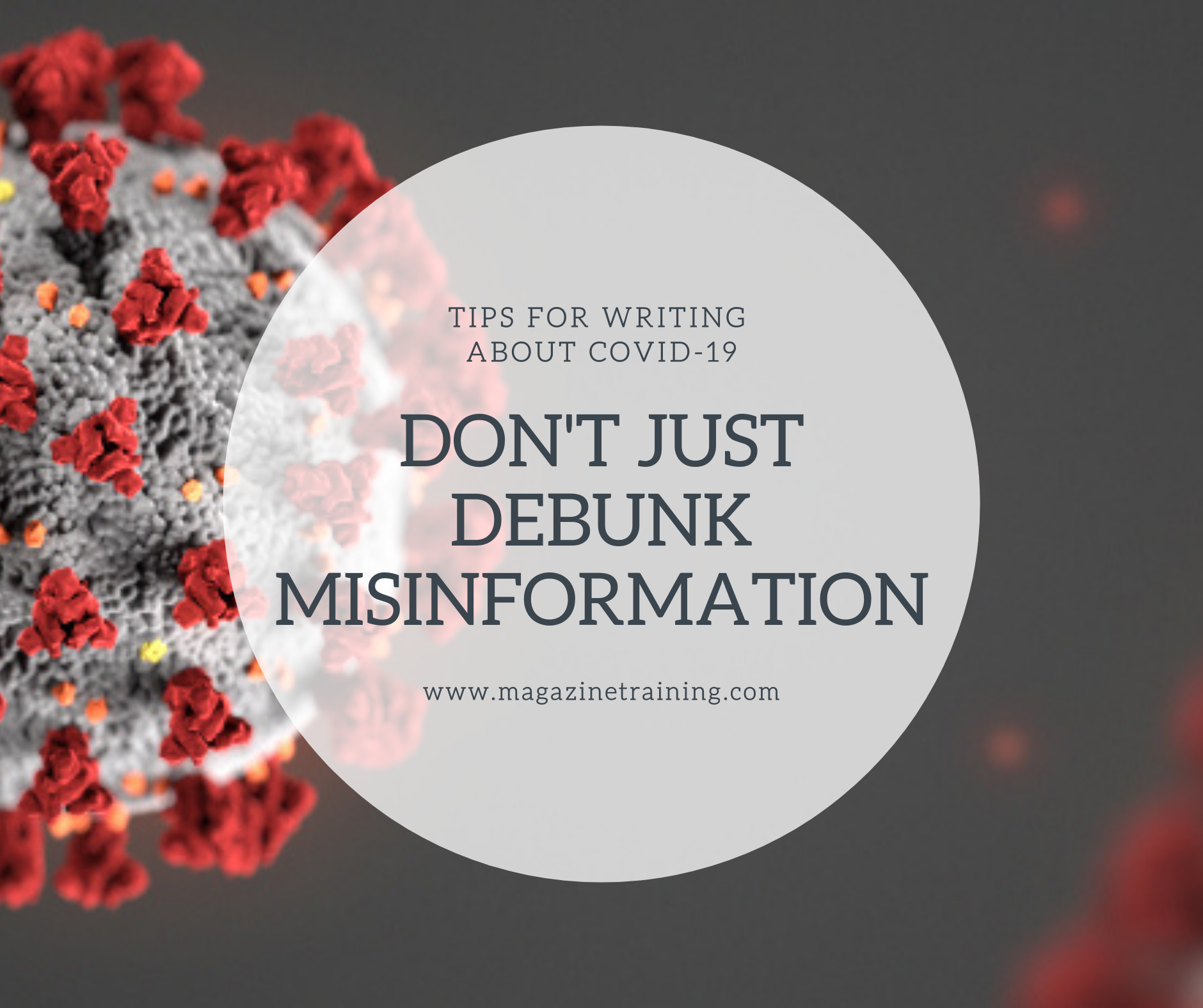 As the SARS-CoV-2 coronavirus began to spread more rapidly around the world in February, the World Health Organization (WHO) deployed the term ‘infodemic’ to describe the information and misinformation circulating alongside it. Many rumors, myths and falsehoods have made the rounds — and still are — covering anything from ‘cures,’ to mandatory quarantines, to conspiracy theories about the virus’ origin.

Experts and journalists have advocated fighting the infodemic by debunking falsehoods, rumors and speculation. Many fact-checking services and articles are doing just this, trying to set the record straight.

Not all misinformation should be treated the same, however. The falsehoods circulating are a varied bunch, after all. “COVID-19 has triggered a fountain of rumors — an indistinguishable mix of unverified information, helpful information, misinformation and intentionally manipulated disinformation,” wrote Heidi J. Larson, director of The Vaccine Confidence Project at the London School of Hygiene and Tropical Medicine.

In fact, some rumors may offer value to journalists. As I argued in an opinion piece last month, instead of viewing them only as misperceptions to be suppressed with accurate information, we should look at them as feedback we can use to help improve our reporting and in turn, ease public fears.

How best to deal with falsehoods and misinformation during this pandemic is one of many difficult tasks facing journalists and publishers. To help ease public anxiety, journalists need to go beyond the one-size-fits-all debunking of misinformation.

Here are a few tips to incorporate more nuance when tackling the next unsubstantiated coronavirus story that comes your way.

(1) Consider whether debunking is the right move

If you’re dealing with what looks like a falsehood that has found an audience, debunk it. Follow recommended tools and best practices on how to do this, including replacing it with a new narrative, which research suggests is effective. Washington Post Health and Science Editor Laura Helmuth also recommends explaining why the falsehood has spread, and keeping debunks short and sweet.

However, avoid the urge to ‘correct’ every falsehood. Doing so can sometimes boost a false belief. Helmuth suggests holding back if a piece of misinformation still hasn’t found a wide audience. This holds for myths that carry racist tropes and xenophobia, too. “It’s a similar problem – if you report on racist social media posts that haven’t gotten a lot of attention yet, you risk drawing attention to them and exposing more people to them,” Helmuth told IJNet.

Still, there are times when racist references aren’t so obscure. Some high-profile figures continue to refer to SARS-CoV-2 as the “Wuhan virus” or “Chinese virus,” for one. Consider adding context when reporting on this: it can be helpful to explain that naming new diseases after a place used to be common practice, but has since been abandoned to avoid stigma, said Helmuth.

Instead, take a closer look. Do some research to distinguish between rumors founded on legitimate anxieties from well-intentioned actors, and those spread deliberately by ill-intentioned groups, perhaps for political reasons.

“There are elements of truth and falsity in all [rumors] – but the point is to take seriously the underlying reasons,” Melissa Leach, a social scientist and director of the UK-based Institute of Development Studies, told IJNet.

Take claims that pet animals can spread the virus, for example. There’s no solid evidence to support the assertion. But, to someone unfamiliar with the science of diseases that jump the species barrier, it’s not a far cry from the legitimate link between wildlife and SARS-CoV-2.

Keep in mind that little is known about the virus still, and guidance can evolve rapidly. The WHO, for example, recently changed its official information on the disease in pets after a case of an infected dog emerged in Hong Kong.

Leach and other social scientists believe that simply correcting rumors can in some cases undermine trust — and building trust is just as important as providing access to accurate information.

There is often much uncertainty when new diseases spread, which fuels fear and anxiety. The reality is that people sometimes use stories to make sense of these situations. As the editors at National Geographic recently discovered, people might even seek these stories out for light relief.

As COVID-19 spreads around the world, more and more articles are acknowledging the fears that surround it, delving into the psychology of fear and toilet paper panic-buying, for example. Looking at rumors through a similar lens can open up new ways of tackling the misinformation problem.

“When psychological states are peaked and people are anxious, they’re more apt to share [inaccurate] information,” wrote Jennifer Grygiel, an assistant professor of communications at Syracuse University, in an article that probes falsehoods about Covid-19.

If you’re dealing with a rumor circulating an anxious public, seek input from social scientists and psychologists on how best to understand and respond to it.

Providing clear information on what we know and don’t know about risks based on the best available evidence also helps combat false information. Be transparent, and distinguish between knowns, maybes, known unknowns, and speculation.

Coverage that prioritizes science and public health over the politics and economics of the response can help keep fears from being exaggerated on the one hand, and highlight real health risks on the other.

I’ve been monitoring and sharing COVID-19-related articles in a newsletter since early January, when the virus was first reported as a ‘mysterious pneumonia’ from China. Unfortunately, until late February the average reader struggled to find articles that focused on the disease and how much the public might be at risk. Mainstream media coverage tended to reflect social and political preoccupations, such as impacts on the global economy.

The sheer volume of information about COVID-19 means readers have a choice of what news and analysis to consume — and believe. This can reinforce pre-existing biases, and speaks to bigger challenges in the media landscape.

“We are in an unprecedented situation when it comes to the Coronavirus pandemic,” Grygiel told IJNet. “This is the first pandemic of the social media era, and the information environment is already unstable given the lack of effective content moderation policies and infrastructure, and the breakdown in the traditional gatekeeper role of journalists.”