Does the pandemic really have people moving out of cities and into the suburbs? Not so fast. 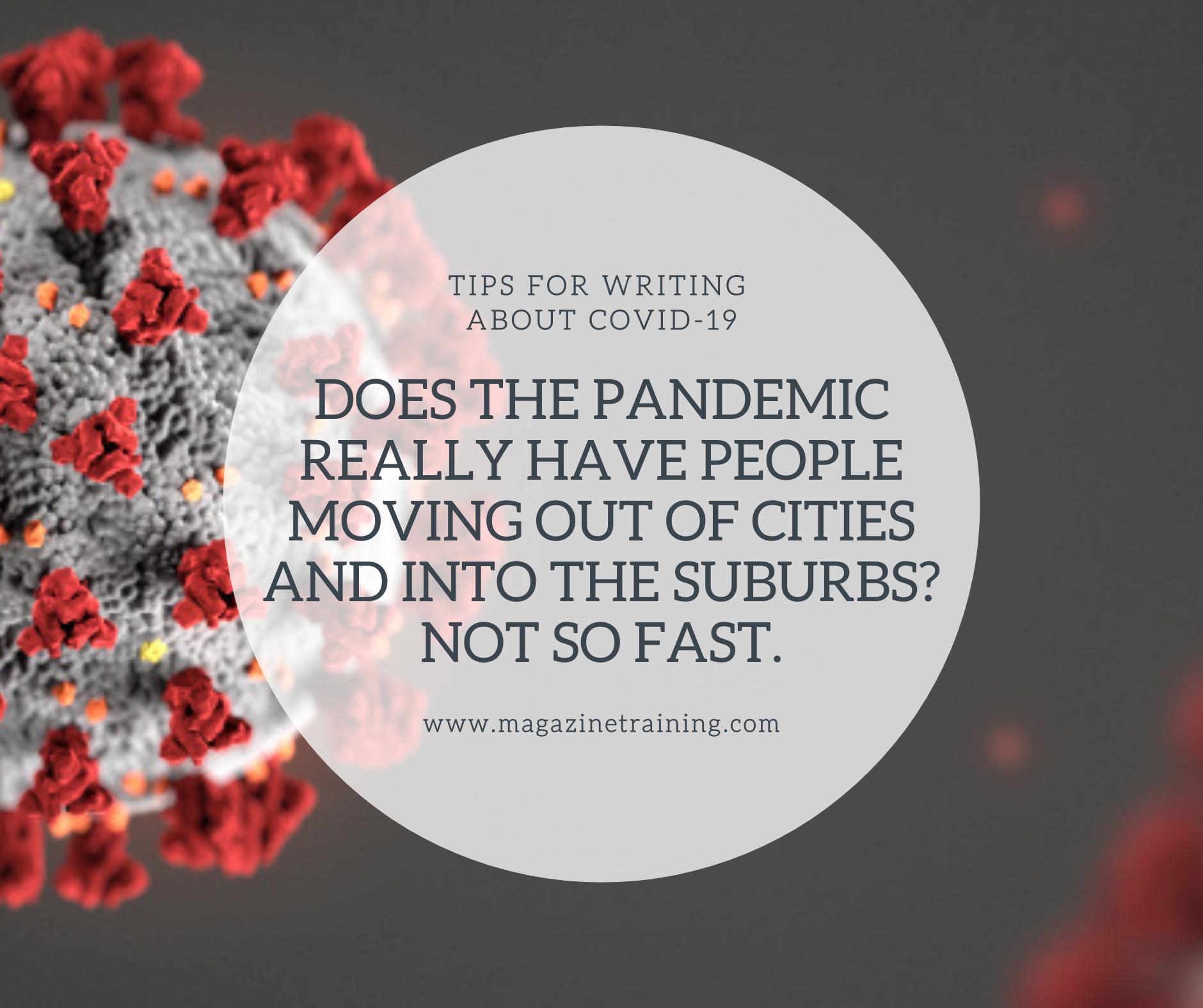 Plus, temperature checks are not reliable, it’s about time to get your flu vaccine, the status of health care reform, stadium voting sites, and more.

It is hard to make definitive statements about the long-term effects of the pandemic but it appears that the early indications that people may be leaving big cities and moving to the suburbs may have been overstated.

Yes, suburban homes are selling fast, but so are urban homes, and the trends are not much different than a year ago, according to a new study from Zillow.

Zillow found that online pageviews for all listings have not changed much in the past year, which may be an indication of what people are shopping for right now.

The notion a few months ago — especially in hot zones like New York City — was that people would move away from crowds and into single-family homes at an increased rate. While that may be happening in some places, it is mostly business as usual.

· Pending sales trends are relatively even across urban classifications nationally, with some regional exceptions.
· Both urban homes and suburban homes are selling more quickly now than they were in February, and the percent change in time on market has been nearly equal for both classifications.
· The share of homes selling above their list price in suburban areas vs. urban areas exhibit the same trend nationally.
· Price cuts are now less common in both suburban and urban areas, with the suburbs seeing a slightly sharper reduction.

· Suburban home listings are not seeing any more attention on Zillow than they were last year, relative to urban or rural listings. Suburban homes made up 62.2% of all Zillow pageviews of for-sale listings in June 2020, down just slightly from 62.6% in June 2019. Urban and rural pageviews each climbed 0.2 percentage points from last year.

· A comparison of single-family homes and condos suggests there is no clear sign of a boom for the detached homes that are often synonymous with the suburbs.
· Single-family home values are growing slightly faster (up 4.4% YoY) than condo values (up 3.1% YoY).

Still, if the work-at-home movement and remote schooling last as long as it seems like they could, there might be less of a reason for people to live in cities, so suburban living may become more attractive.

Temperature checks are not reliable for screening COVID-19

Dr. Anthony Fauci now says something I have also experienced: Temperature checks are notoriously unreliable when screening for COVID-19. Instead, he says, we should just ask questions about symptoms.

I have experienced this well-meaning but useless screening in the last few weeks. I was scheduled to donate blood and took a gulp of coffee just before walking into the donation bus. They stuck a thermometer in my mouth and, no surprise, it suggested I might have a fever. They rejected me right away.

The week before, my wife tried to get a checkup at the eye doctor and they used a thermal thermometer that showed she had a fever. They did mention that the device had been acting up, but they rejected and rescheduled her. What a hassle.

Researchers have found that different devices and where on the body you check a person’s temperature produce different results. For example, four emergency physicians co-wrote these guidelines for HealthWise:

Infrared digital thermometers seem to be popular during COVID-19 since the user can just aim them at your forehead and not get too close to you. Restaurants, bars and doctors’ offices use them.

But let’s remember, those scanners really are measuring surface skin temperatures. Dr. Fauci said that he recently registered 103 degrees on one of those devices before he sat in the air conditioning and cooled off.

And still, this weekend, I was thermal-scanned twice as some sort of “safety measure” to enter a hospital to care for a friend.

Recently, NBC4 Los Angeles investigator Joel Grover put some infrared digital thermometers to the test and found a wide variance in measurements. Remember that two-thirds of people who test positive for COVID-19 have no fever.

The notion that “if they catch some of the cases it might be worth it” doesn’t hold true when a false fever reading causes a person to be turned away from an important appointment. It may also give us a false sense of security when a person passes the digital scanner screening and we feel we can let our guard down.

Get your flu vaccine

The pharmacy called our house at 11 a.m. yesterday to say they received their first shipment of flu vaccines. I got my shot an hour later. It cost me nothing.

Epidemiologists have stressed how important it is to get a flu shot/nasal spray this year. The “flu season” begins in October and peaks from December into February. The Centers for Disease Control and Prevention said, last year, the seasonal flu led to 26 million medical visits, 740,000 hospitalizations and 62,000 deaths.

The last thing we need is to add a flu epidemic on top of a COVID-19 pandemic. It takes about two weeks for a vaccination to begin to provide protection against the flu, so the CDC urges you to act before the end of October to maximize your protection. When you take it as early as I did, the CDC says you do have some added exposure later in the flu season early next year.

Keep in mind the flu vaccine does not come with a money-back guarantee. Even when vaccines match up closely with the flu viruses that are circulating, the CDC says the “flu vaccine has been shown to reduce the risk of having to go to the doctor with flu by 40% to 60%.” The CDC estimated the overall estimated effectiveness of seasonal influenza vaccines was only about 45%.

Every year, the Advisory Committee on Immunization Practices meets to decide what strains of the flu virus are circulating and most likely to circulate. Based on that, the 2020-21 flu vaccines were licensed for release.

Not all flu shots are the same. The CDC explained the options: