Inspiring your readers to share Christ: A campus atheist finds what he wants 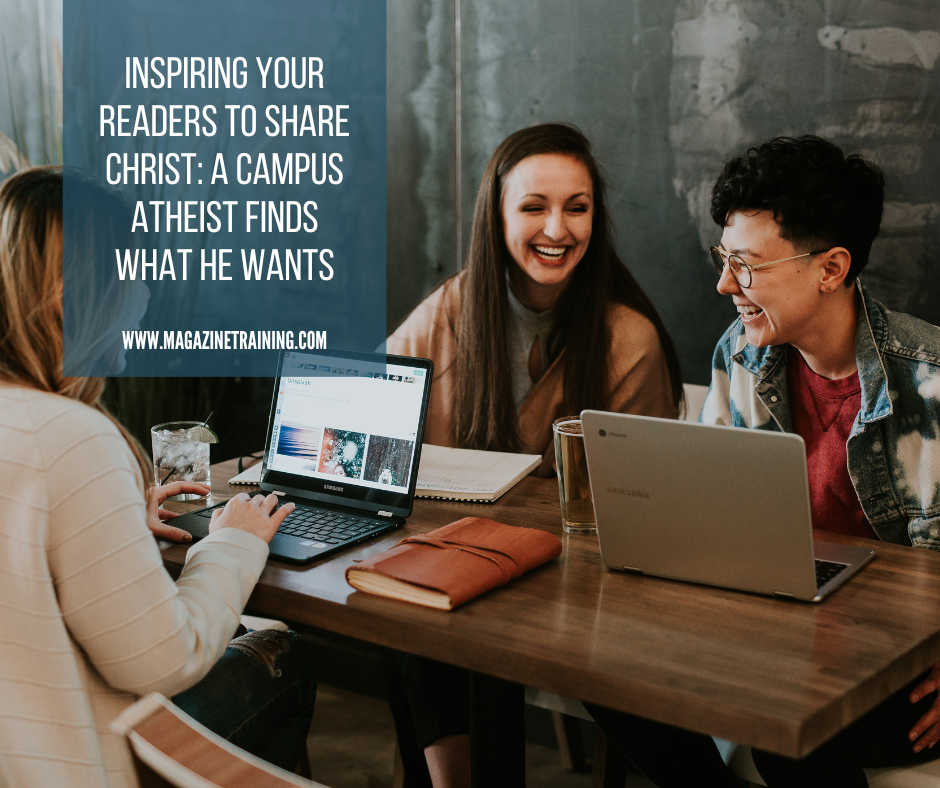 Even as a first-year student, Steve had earned a reputation as a Duke University campus atheist.  He enjoyed arguing with Christians and mocking their faith.

When believers advertised a Christian film in his dormitory, Steve defaced the publicity with vulgarities.  In another prank, Steve chased “Jace,” a Jewish student, through his residence hall while brandishing a lighted torch made from a broomstick and flaming underwear.  When Jace locked himself in a room, Steve pounded on the door shouting, “Jace, you’d better receive Christ!  You’d better receive Christ!”

When Steve’s roommate, Jerry, trusted Christ as Savior, Steve wasn’t quite sure how to respond. He wondered if this faith stuff was getting too close.  But Jerry, Gordon, and other believers befriended Steve, demonstrated Christian love, and included him in their activities.  Steve enjoyed their companionship and hung out with them a lot.

Watch our workshop on “Finding common ground with skeptics.”

Steve had some unusual habits.  He liked to study lying on his bed with a book propped on his chest.  For refreshment, he would drink pickle juice from a jar.  Have you ever tried to drink while lying on your back?  Sometimes part of the liquid misses your mouth, dribbles down your cheek and gets on the bed.  Steve never changed his sheets.  Around December, Gordon and Jerry removed his sheets, stood them in the corner, and remade the bed with clean sheets.

Steve liked attending Christian outreach meetings and became very familiar with evangelistic literature.  Once, a traveling music group distributed a widely used Gospel booklet at their concert and asked those familiar with it to show it to their friends in the crowd.  Steve turned to Jerry and began to present the message of Christ to his roommate, the atheist “sharing his faith” with the believer.  After a moment, Steve said, “Hey, this booklet is different!”

He had received a revised version of the presentation and noticed slight differences in wording, Bible versions, etc.  The atheist was so familiar with the Gospel presentation that he could detect minor edits.

At the end of another outreach meeting, Steve very publicly fell to his knees, raised his hands and cried out – loudly and in mockery – “Oh, Lord Jesus, come into my life!”

A persistent lighting problem – flickering overhead fluorescent lights – plagued that evening’s event.  Leaders had tried many solutions, to no avail.  The emcee introduced Josh as the lights continued to distract and annoy.  About two sentences into his presentation, Josh looked up at the lights and shouted, “Aw, c’mon!”

McDowell had an attentive audience.  Leaders feared he was upset with them for sloppy physical arrangements.  Later, he told them privately that he had claimed the authority of the believer and trusted God to bind the real enemy, Satan.

After the speech, as the emcee rose to close the meeting, the lights began flickering again.  As the crowd dispersed, Steve asked his friends, “Did you see those lights!?”  Josh spoke with him personally about the eternal consequences of rejecting Christ.

Math, John’s Gospel and the Order of the Chair

The next four weeks brought some curious developments.  Week one: Steve told Jerry he believed there was a God and that God loved him.  Week two: Steve said he believed he was sinful and needed a savior.  Week three: Steve explained that he wasn’t sure that Jesus was the only way for everyone, but he believed Jesus was the only way for him.  Week four: Steve was in his dormitory room one afternoon trying to study mathematics but he kept being distracted by the Gospel of John.  He would study math, then feel compelled to read John.

Steve’s change was dramatic.  A demeanor of cynicism and bitterness became one of kindness, peace and deep joy.  His smile and words reflected Jesus’ love.  He communicated his new faith.  Classmates were stunned.

On the last day of classes that spring, the “Order of the Chair” held its infamous annual rally from the steps of the majestic Duke Chapel in the center of campus.  The “OOC” comprised the university’s grossest students.  Late each spring, a toilet would appear on the chapel steps, signaling the noontime rally.  OOC members would arrive roaring drunk with a garbage can filled with green grits.  They would induct new members by detailing – over a public address system – the inductees’ sexual activities.  Each initiate then sat on the commode (fully clothed) and was plastered with green grits.

That year, Christians demonstrated for Jesus at the OOC rally.  They made placards and printed evangelistic literature, taking care to keep content positive and pro-Jesus rather than directly condemning the OOC.  As the mostly male – and mostly lusty – crowd moved toward the OOC venue, Christians distributed their handouts.  Placards bobbed as believers filtered throughout the crowd.  Local television crews filmed the event for the evening news.

As the obviously tipsy emcee began his ceremony, he paused momentarily when one brave soul pointedly but politely walked across the front of the crowd displaying his sign, which the emcee read aloud.  “Jesus is Real, Man!” read the emcee.  “Hey, that’s all right!” he editorialized with a cheerful tone.

Steve was carrying that sign.  Even as a young believer, he helped to spread the message of Christ to people who needed it.  Many students were influenced for Christ because of the changes in one of the campus atheists, Steve.

What factors did God use to nudge Steve toward faith?  Assemblies of God Theological Seminary professor Earl Creps has said that central to the missionary task is “personal involvement in relationships with postmodern pagans.” He asks, “Is it possible that we could find the meaning of our ministries in the aspirations of the lost? I wonder if we have the humility to listen to them.”

Consider some of the principles believers followed to reach Steve and how these might influence your own outreach to secular students:

Be willing to break stereotypes of what Christian communication should be like. Perhaps as He did for Jabez, God will “enlarge (your) border” (1 Chronicles 4:10). I hope He does.

Photo by Brooke Cagle on Unsplash