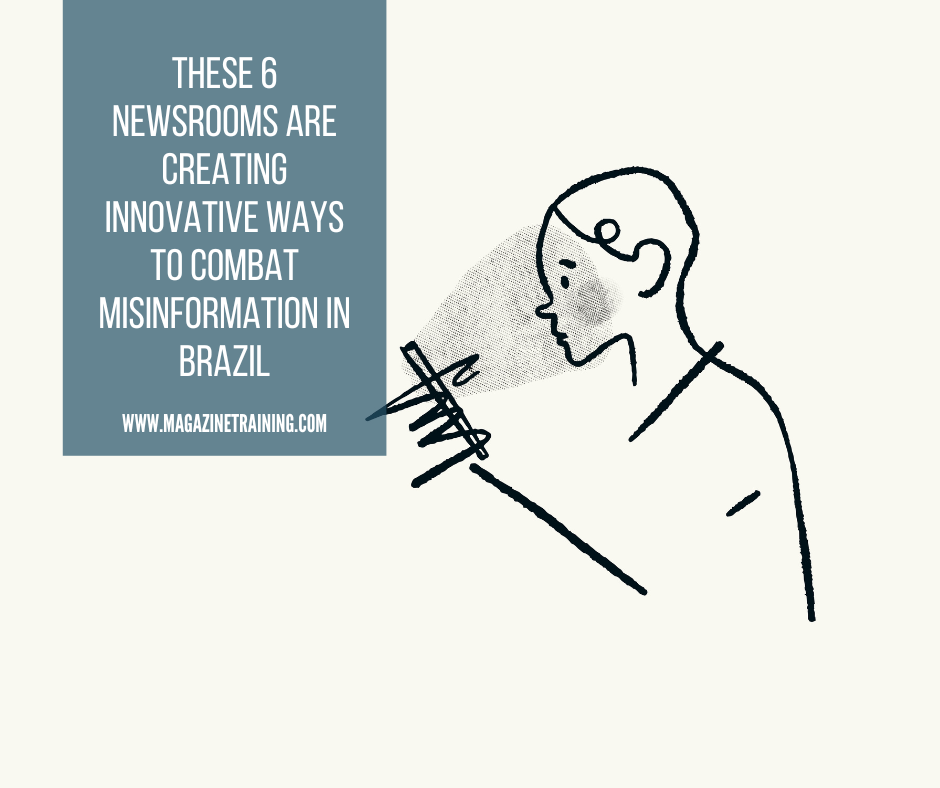 The rise of mis- and disinformation is a major problem for democracies around the world. So-called “fake news”, spread on social media and texting services such as WhatsApp and Telegram, can undercut faith in elections and the democratic process and endanger peaceful transfers of power. In Brazil, the spread of disinformation will present a substantial risk to public faith in the outcome of this year’s presidential election, with false allegations of voter fraud, for instance, already running rampant.

In this context, the International Center for Journalists, in partnership with Youtube Brazil, selected six news organizations for funding and mentorship as part of the “Jogo Limpo,” or “Fair Game” initiative. This initiative aims to support innovative solutions to combating misinformation in the lead-up to Brazil’s elections.

Here’s how these newsrooms are fighting misinformation in Brazil and  creating a fair game for voters in the upcoming elections:

“For the past four years, disinformation has been the most important topic in politics. And I think it also plays a very important role in the upcoming elections,” said Bruno Fávero, growth director at Aos Fatos. As the campaign for president of Brazil accelerates this summer, political rallies, presidential debates and interviews present the opportunity for candidates to speak on a wide range of topics — and to spread disinformation through these mediums.

At Aos Fatos, transcribing current President Jair Bolsonaro’s speeches for fact-checking over the course of his administration took significant time and resources that could have been spent on other forms of journalism. Their solution: to create a free and public transcribing tool for fact-checkers, journalists and researchers — and form a “public record” of speeches to later be analyzed.

“We are compiling every interview and speech that all the main candidates do. And we will offer them in a public, free-to-access page,” said Fávero. The purpose of these tools is to reduce newsrooms’ workloads, while also offering an easy way for the public to fact-check speeches for potential misinformation.

For O’Liberal, a news source in the Amazon state of Pará, the elections also present the opportunity for residents to fact-check what the candidates say about the region. “Sometimes the information [presented by presidential candidates] is not complete. Instead, we are going to listen to people and institutions in the Amazon who study and know the information completely and people who make informed policies,” said Daniel Nardin, O’Liberal’s content director.

During the election season, O’Liberal will fact-check candidates’ claims about the Amazon with help from experts in the region. They also plan to host a candidate interview on the subject, where candidates can be fact-checked by Amazonian news sources on claims and policies they have or plan to enact as president.

“Our subjective goal — when we check information about Amazon and distribute this to the public — is to put more of the Amazon into the agenda of candidates in the presidential election,” said Nardin.

Presidential candidates’ claims are not the only sources of misinformation in Brazil. Misinformation can also spread easily online.

“In 2018, we had a lot of accusations of voting fraud going around on WhatsApp and social media channels, and a lot of people started to mistrust the voting system, especially because of this false information that has been going around,” said Sergio Spagnuolo, editor at Volt Data Lab. “A lot of people have been working towards this goal of trying to curb a lot of misinformation. And for that, we need to have better tools and proper handling of this information.”

Photo by visuals on Unsplash